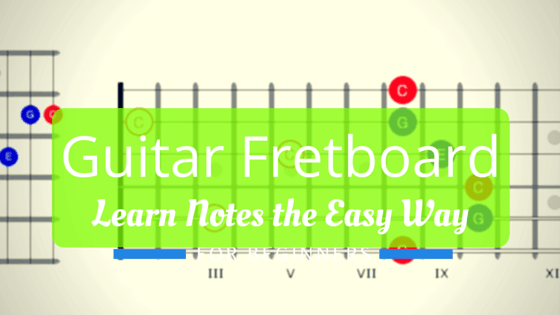 Learning the Fretboard – Quick Guide to The Guitar’s Fretboard Notes

Learning how to play a song on the guitar is quite an accomplishment considering the amount of obstacles that you’ve overcome in the process. But, understanding what you’re doing, where you’re going, and how to get there is another level altogether.

I often equate learning the fretboard of the guitar to being dropped out of a plane in the middle of the night into the Atlantic Ocean and being told on the way down to swim to Portugal. You have a basic idea of where you want to go but none as to where you are and how you’re going to get to your final destination.

I have often told students that I can teach a blind person—who’s never seen or played a piano—the notes of the piano’s keyboard easier than the notes of the guitar fretboard to a guitar student. It’s really easy: Now, try to do the same with the guitar’s fretboard.

There’s almost a sense of randomness as to where the C notes are in relation to one another. I found this incredibly frustrating and private lessons did not offer a solution. It seemed as though I learned the fretboard one note at a time through a series of trial and error attempts—and, in my case, it felt as though it was more error than trial.

In this article, we will look at some common methods for understanding the guitar’s layout and how to logically connect from one chord to the next, one scale to the next, etc.

The method is based on having your 1st finger find the root on the 6th string and then apply the chord or scale pattern. This method is very useful for the beginner and a great place to start. All you need to do is learn the notes of the 6th string.

You can apply this system to all 6 strings which means a lot of tedious memorization.

A better solution would be to put in the next method into practice.

First, a few guidelines regarding the major scale.

You can apply this system to all 6 strings which means a lot of tedious memorization.

A better solution would be to put in the next method into practice.

All roads eventually lead here. Trust me. I’m ashamed to say it, but I learned the fretboard through sheer memorization. It wasn’t until I was a seasoned teacher that I heard of the five-root-shape system, the tonality wheel system, the CAGED system, etc.—they all refer to the same thing. I went to support a fellow colleague as he did a workshop on the CAGED system and it made complete sense. I then began to apply it in my teaching system with great success.

The five root shapes are the shapes of the CAGED chords: C, A, G, E, and D.

Next, we’ll look at how these shapes apply to the fretboard. If you recall the introduction to this article, I made reference to finding the C notes over the entire fretboard. And, we ended up with this:

It looks totally confusing. So, we’ll look at just the C notes (in red).

It suddenly becomes a lot easier to digest. By understanding the relationships between the notes we strip away all of the ultimately confusing information.

How does this system work?

We’ll begin by using the five shapes of the CAGED system and apply those shapes to the C chord. We turn all of the open-position shapes into movable shapes—except, of course, in the case of the first C chord.

The C chord with the C shape.

This shape is a little tricky in regards to the concept. Because they’re both C chord and shape. As you progress in your playing you’ll notice the importance of this shape. But, for now, this is our starting point.

The C chord with the A shape.

Notice that the root of the C shape was played with the 3rd finger. In order to play the C chord with the A shape you’ll need to use your 1st finger for the root on the 5th string. Can you see the A shape? The visualization of the movable-A shape is important as you move forward. If you don’t see right away, don’t worry, it will all make sense soon enough.

The C chord with the G shape.

This is a finger buster to play. And, to be honest, I rarely play the movable-G shape; however, I see it everywhere and I use it as a visual reference for related chord and scale shapes.

The C chord with the E shape.

This is one of the first movable shapes that beginners learn. The bottom two and three strings give use the ever-popular root-6 power chord.

The C chord with the D shape.

As I mentioned above in the section “The C chord with the G shape,” I don’t play this chord shape often. I will use the shape on the top three strings for chordal accompaniment and, mostly, as a shape reference for solos.

This is just a stepping stone to unlocking the mysterious patterns that connect the notes of the fretboard. The first step is seeing the shapes. As you continue, the underlying scale shapes will also become easy to immediately recognize.

Related: How To Buy a Guitar

Ultimately, you’ll reach the next level. Not only will you be able to identify the roots and the CAGED shapes, but, you’ll also be able to see 3rds, 5ths, 7ths, etc. Once this information becomes second nature I would suggest that you investigate the CAGED system further to deepen your understanding of the layout of notes on the guitar.

And, hopefully you’ll find that there is a method to the madness.

Thanks for checking out this article and best of luck.