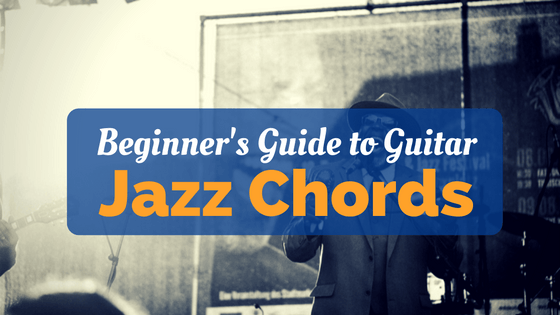 My early lessons were scheduled on a weekly basis at the local music store. However, I would go there every chance that I could, hang out, thumb through the guitar magazines and eavesdrop on the conversations of the older and more experienced players.

They would mention guitarists and music styles that I’d never heard of. The names held a mystery of some secret musical world only available to those would traversed the gauntlet of power chords, triads, and pentatonic scales.

These local elder statesmen stated that if you could play jazz then rock was easy. I was intrigued.

That statement encourage me to learn more. I don’t necessarily agree with it 100%. Instead, I like to view it in this manner:

In this lesson, we’re going to look at some must-know jazz chord voicings and chord progressions.

Chords are referred to by their function in the key. The Roman numerals tells us what that function is. Take a look at the table below:

We use this to be able to move from one key to the next (transposition) and keep the same chord structures. This is a very brief overview and way too much to get into in an article like this. I encourage you to dig deeper if you find this topic interesting. It certainly warrants further investigation.

Everything begins with the blues. The 12-bar blues is the foundation for jazz and rock styles so this is our starting point. Also, we’ll approach this with the “four-to-the-floor” strumming style made famous by Count Basie’s guitarist, Freddie Green.

Blues has special considerations in that it uses the I–IV–V chords but they are all dominant 7 chords. There’s not much further explanation on this, it just is and we’ve all come to accept it. It may be easier to visualize the Basic Blues Progression like this, where each cell is a measure:

The basic blues progression can be “jazzed up” (pun intended) by adding some substitutions that help add interest and create more of a weaving motion. Check it out.

The Circle of Fifths (or Cycle of Fourths)

One of the basic principles that defines chords moving from one to the next is that there is a strong tendency for notes to move down a perfect fifth (or up a perfect fourth). What that means is that G wants to go (counterclockwise to C, then C wants to go to F, etc.

The COF (Circle of Fifths or Cycle of Fourths) looks like the face of a clock. Instead of numbers that indicate the hour we have note names that can be used to represent chords and keys. How to Use the Circle of Fifths

Here’s how it works. Let’s find the I–IV–V chords for any key:

This is a very rudimentary look at the theory and usage of the Circle of Fifths. It’s merely to understand the science behind chord movement and explain why chords move the way that they do.

Here’s a simple etude that will get you used to playing and hearing the II–V movement. This is another chord etude. This example will help you get used to the I–VI–II–V chord movement. Rhythm changes refers to the 32-bar song form that became popular during the 1920s. It’s made up of four 8-bar sections. There’s an A section that repeats; however, notice that the last two bars are a little different. That’s because the progression tells you what’s coming up next. The third 8-bar section is the bridge and the fourth 8-bar section is the A section again:

This song form is commonly referred to as the AABA form. But, most players call them rhythm changes. George Gershwin’s “I Got Rhythm” and the “Flintstones Theme” are probably the most famous examples of this song form. Also, jazz improvisers used this progression as a vehicle to hone their skills. I think back to the music store guys (I wish I had known their names) and recall how there frethead discussions influenced me. It was challenging trying to find my way into the world of jazz.

Much of my early jazz education came from listening to WBGO (the jazz station from New Jersey that I could pick up on my radio), the liner notes from albums, and the good fortune of studying with Emily Remler when I was 17.

Berklee certainly continued my education but it’s been playing and working with other musicians where I find the real inspiration.

I hope that you’ve enjoyed this article. I appreciate you hanging with me.