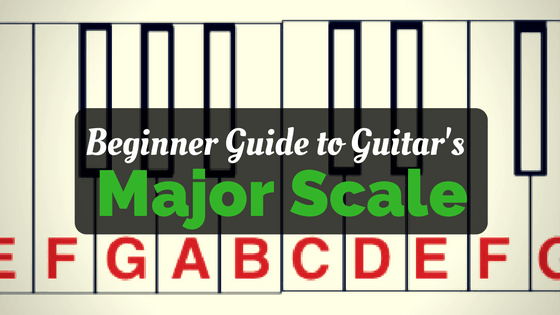 The Major Scale For Guitar – Why Start With C Major?

Let me tell you a story. I few years back, I took a hiatus and went to the Andes mountains to relax. I brought with me a dozen books and my guitar.

This was a relatively remote part of town, complete with water and electricity rationing. It turns out that my neighbor’s son was a guitar player. And, although he was quite proficient on the instrument, he had failed the entrance exam for the university. He and his parents were quite puzzled at the denied acceptance to the university based on his technical command of the guitar.

His father said to me, “He’s been studying guitar for over five years and has been very dedicated… I don’t understand.”

Unfortunately, I do understand and explained to him that studying guitar is not studying music and, after sitting with his son for an hour or so, I realized that he was an encyclopedia of licks and tricks and songs from the 80s metal period, but had little understanding of what he was playing.

My protege fell into the best/worst thing about the guitar; that is, you can learn a few open chords, a couple power chord shapes, and a pentatonic scale, and, you’re off and running. The downside of this equation is that you can become a technical master of the instrument while still remaining an absolute beginner in the music category.

I took him on as my four-month project. It turns out that he could skate all over the fretboard but could not play chords effectively and had no idea what he was doing—from a musical standpoint that is.

This is a true story and this article was our starting point.

Why Do We Always Begin with C Major?

First, we created a video to touch on the high points of this article and I'd suggest checking it out below:

The C major scale is our starting point because this scale does not contain altered notes (better known as sharps or flats) and, sharps and flats are collectively referred to as accidentals.

This doesn’t mean much to guitarists, which is why understanding music theory makes more sense on the piano. Here’s the way the scale looks on the piano.

Notice that it’s all of the white keys, which means that accidentals fall on the black keys. Almost makes you want to wish you played piano instead.

As you view the image above, you can see that the musical alphabet goes from A to G and then it repeats. The C major scale is created by playing the notes from C to C. And, the pattern that results from this is our formula for the major scale (more on this in a moment).

Notice that there are no black keys between E and F; and, B and C. That means that these notes are a half step apart. From one piano key to the next is the distance of a half step (measured in intervals). The rest of the notes have a black key in between them making the distance a whole step (or a whole-step interval).

This brings us to the major scale formula:

Let’s check this out on guitar.

In order to understand the concept of whole-steps and half steps, especially as it relates to the major scale, We need to create a one-string C major scale. Let’s begin on the 5th string, 3rd fret:

Next, we’ll do the same thing one octave higher, on the 2nd string.

This time we begin on the 2nd string, 1st fret:

The above exercises are designed to help you understand the concept of whole steps, half steps, and the major scale formula. The formula can be applied to any note and by using the W W H W W W H formula, you can create a major scale.

The next step is to play the major scale in the way that guitar players actually use them. There is a method that’s used for understanding the fretboard called the CAGED system. You can read more about it in my article, “Learning the Fretboard – Quick Guide to The Guitar’s Fretboard Notes”.

The following five patterns are based on the CAGED system and are the foundation for scale playing. Begin by memorizing these patterns.

The major scale is the reference point for understanding the building blocks of music, also known as music theory. It’s an important part in the journey from a guitar player to musician. This article is just the tip of the iceberg. I encourage you to continue researching scales, chords and music theory. Then apply what you learn to the guitar.

My protege from the beginning of the article started his transition from guitarist to musician a couple of years ago.

At the writing of this post, he’s in his 3rd year (as a music major) at the same university that rejected him just a few years ago. He’s in the jazz ensemble and the classical guitar ensemble. It’s been my pleasure to be a pit stop in his musical journey. And, his musical world has been extended to jazz and classical music.

I hope that you continue your journey and I appreciate you taking a moment and checking out this article. Click here to see my write-up on the minor scale chords. Thanks for reading. Till next time.