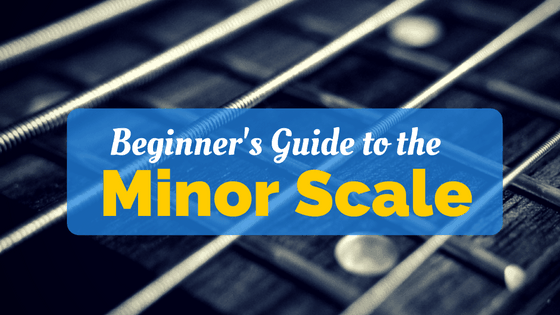 The Beginner’s Guide To The Minor Scale Chords For Guitar

Imagine a world where you only feel happy emotions.

I know that many people feel that being happy all of the time seems like a good idea. But, imagine a world without minor keys. The following songs wouldn’t exist:

All of the above-mentioned tunes are in minor keys; but, they all convey different sets of emotions—they’re not tearjerkers and let-me-slit-my-wrists-and-get-it-over-with songs.

They’re songs that cover a range of topics, themes and ideas. Minor keys are great for songwriting, improvisation and changing textures and moods within songs.

I encourage you to check out my “The Major Scale” article for more information on The Musical Alphabet, Steps and Intervals, and other terms that you may be unfamiliar with.

Also, check out the video I made to supplement this article on the minor scale for beginners:​

In our article, “Learning the Fretboard – Quick Guide to The Guitar’s Fretboard Notes,” I discuss the relationship between major and minor scales. If you need to brush up on that concept then now would be a good time to review that article.

For those of you who are already familiar with the concept—or have little interest in music theory beyond this basic idea—we’ll move steadily forward.

In simple terms, every major key has a minor key that is formed using the same notes. If you spell out a major scale then the 6th degree can be used as the relative minor (more about this in the next section). We use the term relative because the keys are related and share the same key signature.

Take a look at the chart below, both keys share exactly the same notes but in a different order.

So, how do we find the relative minor of the major scale. Well, let’s start with the C major scale.

If we then go to the 6th degree, and keep the same pattern; that means, don’t change any of the notes. You find the root of the natural minor scale.

Author’s note: When we simply say “minor” we are referring to the natural minor scale. So, when we say minor, natural minor is understood. That’s because there are other minor scales and there’s a list in the “Closing Thoughts” section.

Next, let begin the natural minor by starting the scale on A. Remember we won’t change any of the notes.

Finally, we change the scale degrees to reflect the change to the relative minor.

This brings us to the major scale formula:

Let’s check this out on guitar.

The One-String A Natural Minor Scale

Next, we’ll do the same thing one octave higher, on the 3rd string.

This time we begin on the 3rd string, 2nd fret:

The above exercises are designed to help you understand the concept of whole steps, half steps, and the natural minor scale formula. This formula can be applied to any note and by using the W H W W H W W formula, you can create a natural minor scale.

The next step is to play the natural minor scale in the way that guitar players actually use them. There is a method that’s used for understanding the fretboard called the CAGED system. You can read more about it in my article, “Learning the Fretboard – Quick Guide to The Guitar’s Fretboard Notes”.

The following five patterns are based on the CAGED system and are the foundation for scale playing. Begin by memorizing these patterns.

I hope that you continue your journey and I appreciate you taking a moment and checking out this article. Thanks for reading. Till next time.