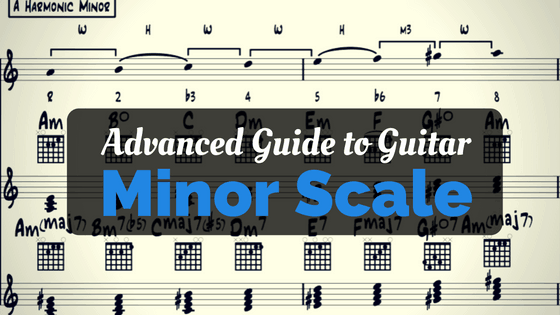 Minor Scale Chords – The Ultimate Reference Guide For All Guitarists

When I was about 13 or 14, my music teacher made me write out everything. I hated him at the time for that; but, today I’m so grateful. I wanted to learn rock tunes and he taught me music. Ah, the sweet ignorance of youth!

He made me buy a music notebook… And, use it!

I would fill it with pages and pages of private-lesson homework. He would give me five pages of homework per week. Write out the scale, then the triads, then the seventh chords, then the formulas for the scales and chords, et al. It was painstaking work and my mother loved him.

That being said, in order to better understand minor scale chords, I’m gonna share with you a much more neater and organized version of my music notebook.

I’ve included a table (for each scale) that I had initially used for understanding the terms, then used it as a teaching tool, and now it serves as a quick overview of the information pertaining to each scale. I certainly hope that you find it useful.

Also, the music notation provides much of the same information as the table, but in musical form, and, I also wish that you find this helpful.

And, with that, welcome to this minor-scale chords reference guide.

In a recent article, “Beginner’s Guide to the Minor Scale,” I wrote about the natural minor scale, the theory behind the scale, reviewed the major/minor relationship, covered the minor scale formula and introduced 5 must-know patterns.

This post is a companion to that “Beginner’s Guide...” piece. Here, we’re gonna compare different minor scales and the diatonic chords that they create.

These are the scales that we’ll cover:

And, we’ll take a look at the chords that they create.

The table serves as a quick guide for each scale and its related chords. The table illustrates:

Each scale is also represented in standard music notation. For some people, this is an easier way to visualize the scale and the chords. The music notation shows three systems:

In the table below, we’ll look at each scale side by side. Again, I ask you to draw your attention to the 3rd, 6th and 7th degrees.

As you play the scales and compare the sounds and chords, you’ll notice the subtle differences that give each scale it’s charm. Now, you can begin to understand why minor scales provide you with many more options than their major counterpart.

This also known as the relative minor, is created by referencing the major scale. By starting on the 6th degree of the major scale, we create the natural minor. BTW, this is also referred to as the Aeolian Mode. So, this scale has three names: The harmonic minor scale is the same as the natural minor scale but with a raised 7th. This creates a minor 3rd interval between the 6th and 7th degrees giving this scale an exotic sound. This sound is popular in Eastern European folk music as well as classically-influenced rock and jazz. You can simply view the jazz minor scale as a major scale with a flat (or minor) 3rd. Jazz players from the post-Bop era made this scale popular; however, many modern guitarists are throwing into popular music. Below is chart of some of the most commonly-used minor chords. There are three versions of each chord type:

Generally, the root-5 version is also a movable shape even though it’s shown here as an open chord. I encourage you to try these out in other keys.

Minor scales create an incredible array of sounds and some players like to refer to these sounds as colors. By adding a few of these chord ideas into your playing, you’ll discover a whole new level of expression. I encourage you to continue exploring more sounds, scales and chords while developing as a musician.

It’s my pleasure to share these ideas with you and I thank you for taking the time and reading this article.