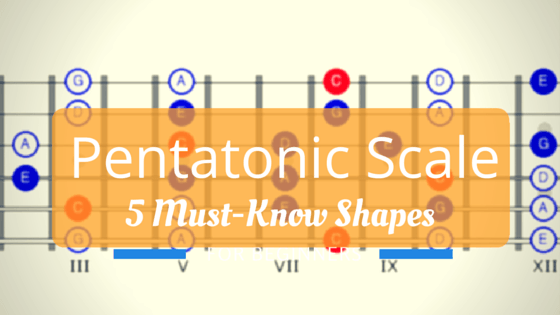 5 Must-Know Pentatonic Shapes For All Guitarists

Every beginning guitarist, at one point or another, hears the term pentatonic or pentatonic scale. Usually it’s very early on in lessons or from fellow guitarists.

Likewise, intermediate players look to develop new and interesting ways to improve their pentatonic playing. However, it’s been my experience, as a player and instructor, that most fail to unlock the potential that the 5 pentatonic shapes have to offer.

But, first, let’s get some terms out of the way so that we know what we’re talking about.

Notes are arranged in a series of steps (whole steps and half steps) to form a scale. A scale is the particular order that these notes form.

The distance between two notes that are two frets apart.

The distance between two notes that are adjacent, right next to each other, or one fret apart.

The origin of the term comes from “penta” meaning five and “tonic” meaning note. Therefore, pentatonic refers to a five-note scale.

Why Pentatonics Are Cool

As guitarists, we love pentatonic scales—almost to a fault. But, what is the fascination between guitarists and their pentatonics? Well, this isn’t by accident.

First, pentatonic scales fall nicely under our fingers. The symmetrical shape (two notes per string) is easy to visualize, easy to play, easy to slide over the fretboard and change keys; in short, it’s just the simplest, fastest and easiest scale to begin playing lead guitar.

Second, it’s easy to sound good. From the opening licks of Chuck Berry’s “Johnny B. Goode” to the epic Jimmy Page solo in “Stairway to Heaven” and the virtuosic opus of Eddie Van Halen’s “Eruption”, the pentatonic stamp is all over rock and blues music.

To sum it up, why do guitarists love their pentatonic scales:

Many players begin their pentatonic study with the 6th-string root, 5th-fret position of the A minor pentatonic and that becomes their reference point. Let’s correct that misunderstanding right now and arm ourselves with the proper information.

In music theory—hang in there, this is actually very simple and we’re not going to go too in depth—the starting point for scale study is the C major scale because it does not contain any sharps or flats. It’s all of the white keys on the piano starting and ending with C.

Wouldn’t it make sense that we begin with a C pentatonic scale?

Yes, with the C major pentatonic to be exact. There is a reason as to why we, as guitar teachers, begin with the A minor pentatonic.

Other than it sounds good and it’s easy to play, it falls right in the middle of the fretboard where the playing position is more comfortable. (The frets aren’t too close together or too far apart). And, the root is easier to visualize and reference as it falls under the 1st finger.

They share the same notes only with a different starting point. This is why they’re related or, in musical terms, relative to each other.

The Pentatonic Scale Over the Entire Fretboard

Now we’re armed with the proper information to get the most out of this article. The following diagram illustrates the C major pentatonic scale over the entire fretboard.

The following diagram illustrates the A minor pentatonic scale over the entire fretboard.

This may look daunting but it’s actually quite easy once we break it down. And, we’re gonna do just that using a simple system called the CAGED System.

This system has been used to help guitarists visualize the fretboard and understand the guitar’s layout. It’s based on the C, A, G, E, and D first-position, open-string chord shapes.

Next, we compare these shapes to the pentatonic shapes.

The 5 Pentatonic Shapes for C Major

Here’s an overview of the fretboard:

I know, it looks a little overwhelming, even with the information that we have learned so far. For this reason, it’s easier to break them down into the five CAGED shapes.

Try to visualize the C chord, it’s presented here with solid circles. The hollow circles are the additional notes needed to complete the pentatonic scale.

C Major Pentatonic with the A Shape

Try to visualize the A chord shape. In order to turn the A shape into a C chord we need to move the chord shape to the 3rd fret. The chord shape appears with the solid circles. The hollow notes are the additional notes needed to complete the pentatonic scale.

The 5 Pentatonic Shapes for A Minor

Here’s an overview of the fretboard:

Again, this may still look overwhelming; however, a little less daunting than before. As we apply the CAGED system to this you’ll find that it’s sometimes easier to visualize the relative major shape. Let’s take a closer look at these 5 patterns..

A Minor Pentatonic with the C Shape (or Am Shape)

Try to visualize the C chord shape or the A minor shape, whichever is easiest for you. Again, the solid circles represent the chord tones while the hollow circles show the additional notes needed to complete the minor pentatonic scale.

A Minor Pentatonic with the A Shape

This shape is a little bit more difficult to visualize. I find it easier to visualize the Am7 chord or the relative major (the root-5, 3rd-fret, major barre-chord shape of C major).

A Minor Pentatonic with the E Minor Shape

I like to refer to this shape as “everybody’s favorite” because, if you only know one pentatonic shape, this is the shape to know. It’s the shape that we all start out with. And, in many cases, have a hard time breaking out of.

A Minor Pentatonic with the D Minor Shape

This is another pattern that has a difficult reference point. The one that I found useful is using the open-D minor chord shape. Can you see it on the top 4 strings?

A Minor Pentatonic with the ? Shape

This often-forgotten-about pattern gets lost in the shuffle and you can see why.

There is really no suitable reference point. Here I’ve used an A minor shape as an outline; however, this is much more of a personal reference as I use this chord shape as part of my chord vocabulary. It’s actually a pentatonic shape that I discovered in the playing of B.B. King, Albert King, and Eric Clapton.

Many advanced and adult students have come to me in the past with one common concern—they’re bored with their playing.

They’ve tried to learn 1001 licks and 101 exotic scales only to fall back on the tried-and-true “everybody’s favorite” box pattern.

As you move around from shape to shape, the same licks will sound differently and you will break out of the rut you’re in, if you stick with it. Thanks for checking this out. Till next time.