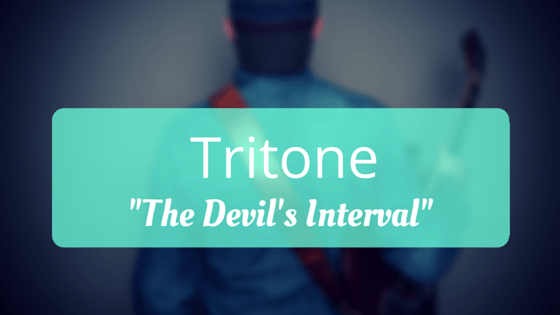 What is a Tritone? How To Use the Devil’s Interval

The tritone has been the topic of so much discussion that has led to some misinformation and misunderstanding.

First, the tritone received its famous nickname, the Devil’s interval, for being the diabolus in musica or the Devil in music. The two notes, when played together, form a dissonant sound that has been described as being restless or evil.

This created controversy from the early Middle Ages through the 19th century and was banned from being used in church hymns and religious songs. The common myths were that singers that sang this interval were excommunicated from the church or even burned to purify the evil that the sound of the interval conjured up.

Before we describe the tritone, we need to revisit the definition of an interval. An interval is the distance between two notes. A tritone is an interval that is three whole notes (or steps) apart and is notated as an augmented 4th (+4), diminished 5th (d5), as well as, half an octave; i.e., it splits the octave into two equal halves.

Why is it important?

As stated above, the interval of a tritone produces a dissonant sound. If we look at the C major scale:

Each note is referenced by a scale degree. The scale degree tells us what position the note has in the scale and, therefore, its function. In the key of C, for example:

Another usage for the scale degree concept is to define the interval or the relationship between two notes; for example,

Because of the tension created by the naturally occurring (or diatonic) tritone in the V chord—the chord built on the 5th degree or, the G7 in the key of C—the pull created from the G7 to the C chord is one of the guiding principles of Western music.

This tritone principle is one of the main reasons behind the phenomenon of the Circle of Fifths (which is a concept for a separate article; however, I’ve added the Wikipedia link for more information).

We have seen how the tritone works in a chord; however, rock guitarists have enjoyed using the tritone interval, in a melodic sense, for creating some of the most recognizable riffs in the history of rock music. Here are a few excellent examples with a link to the YouTube video:

Rock Songs That Use a Tritone in the Main Riff

The above songs demonstrate the use of the tritone in the main riff of the song. We’ve all heard the use of the terms riff and lick, and, many of us, myself included, throw these phrases around as though they mean the same thing.

When, in reality, they are different:

This is just an introduction to what the tritone is, why it’s important, and how it’s used in rock.

There are many more concepts and principles to explore and a lot of music left to listen to, learn and play. So, now that you’re armed with some tritone knowledge, go forth, find tritone riffs and licks in your favorite songs and create your own riffs and licks.

Thanks for reading and good luck.